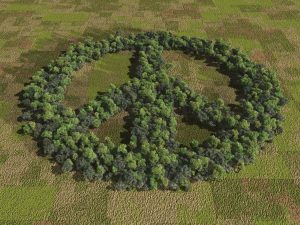 Seventeen years together – fifteen of them married; and not one fight. Impossible, you say? It’s true. There have been no harsh words, no fits of anger, no slamming doors or throwing dishes. No going home to mother, no silent treatment and no paybacks. Not once. Truly. Sounds like a marriage-made-in-heaven, doesn’t it?  Well, guess what…it is. My husband is the nicest man I’ve ever met and we’re highly compatible. It works great.

So, when does the shoe drop? There has to be something! Okay – I’ll admit it.  We don’t agree on everything. However, we just don’t feel the need to convince the other that our own way is The Right Way. Can peace be that simple?  Obviously, yes.

I read a blog post  from a good friend and mentor of mine, Pam Slim. Her post focused mostly on sales and marketing programs, and described how uncomfortable it felt to be approached by a group selling a health and mental wellness regimen as The Way instead of A Way to get healthy. The approach left her with a strange and “off” feeling.

Pam’s blog post inspired the life skills lesson I recently taught my son’s 4th grade class.  I asked a student to come to the board and show us the way to illustrate how three multiplied by six equals eighteen.  She took the marker and penned: 3×6=18.  I asked another to show us the way to tie his shoes; he did.  One student described the way to drink a soda, and yet another described the way to make a PB&J sandwich. All were correct. When I asked if any student could show us a different way to illustrate the equation, tie the shoes, describe drinking the soda and make a PB&J sandwich, four different students obliged with four different methods.  All were correct.

My challenge to them was to show me “The Way” to perform the task. Since both answers were correct, how could either be “The Way”? We concluded that each challenge had been answered with “A Way”.

Although there may actually be only one way to do certain things, (none which come to mind right now), when we speak in terms of The Way, it often represents our ego state as in My Way or Our Way. “If you are a Republican, this is The Way you think” (Our Way). “If you are a Christian/Jew/Budhist/ Hindu etc., this is The Way to get to heaven” (Our Way). Hitler based his master-race on The Way people should look; blue-eyed and light-haired (His Way).

My clients often come to me with frustrating scenarios involving other people, telling me things like the other person “just doesn’t act The Way he’s supposed to!” They are convinced that their way is The Way to do something, think about something, or feel about something and they can’t figure out why everybody else doesn’t know it. I remind them of these things:

The Way versus A Way is where arguments start, lines are drawn, religions are conceived and wars perpetuate.

So, what are your options if you want to feel less frustrated? Before you open your mouth and fire-off a round or twenty:

What do you do with all this newfound information? Relax. Breathe. Allow yourself to be human. Be open to the possibility that just because you disagree, it doesn’t mean you’re wrong – or that anybody else is either. Then marvel at the growth you’ve just experienced, and the simplicity of peace.

Posted in be PRESENT, better THOUGHTS, INSPIRING, KIDS get it!, RELATIONSHIPS and tagged life skills, marriage, peace, relationships, The Way