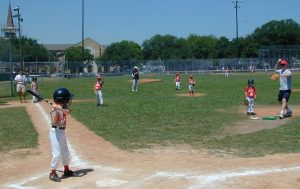 My 10-year old son’s little league team recently came face-to-face with their first loss in a double elimination play-off series. Having been in first place all season they knew they had the skills, but their overconfidence and wandering focus led them to defeat. The team was devastated and tears were flowing.

My heart was aching for the boys, and they were scheduled to play the very next night with their freshly bruised pride. So I did the only thing I could think of. I emailed their coach and ask him if he would allow me to talk with the boys for just 5 minutes before the game, to which he replied “They’re all yours.”

With 10 minutes to go before game time, the coach had the boys take a knee and give me their attention. They even removed their hats. I held a baseball in my downturned hand and ask them to focus and clap the minute they saw it leave my hand. One, two, three balls dropped to the ground in varying intervals as the boys focused and clapped. Before I dropped the fourth ball I looked down and said “Wait. Why aren’t you clapping for the balls on the ground?”

“Because they fell already. They’re not going anywhere!” they yelled.

My message to them was that baseball is a game that keeps moving, and in order to win their focus needs to be in the RIGHT NOW. Comparing the dropped baseballs to bad pitches, strike outs, flubbed throws and catches, I was able to illustrate that once those things happen, they are over in an instant and part of the past. If they chose to focus on those mistakes, beat themselves up and live in the past, they were taking themselves out of the game that was happening RIGHT NOW.

“How many team players are there on the field at once?” I asked.

“So if one of you is living in the past because of a mistake, how many people are playing in the RIGHT NOW?”

“Then if more than one player takes himself out mentally at the same time, you’re playing pretty short handed out there.”

“If you strike out tonight, walk a batter, make a bad throw, or make an out…you must stay in the RIGHT NOW! Stay in the game. Your team needs 9 players on the field at every minute. Stay focused on WHAT’S HAPPENING IN THE RIGHT NOW!! Then ask yourself “WHAT’S NEXT?” and do it. The game is not going to stop to give you time to beat yourself up. Beat yourself up after the game if you must, but don’t leave your team short-handed in the middle of the game by taking yourself out mentally.”

They got it. They were pumped and ready to start the game. The coach called them to the huddle for his usual “What time is it?!” cry, to which the kids always yell back “Game Time!” This time to his surprise (and frankly, mine too), they all yelled back “RIGHT NOW!”

They played their hearts out. They were focused. They encouraged each other. And when things didn’t go exactly as expected, I reminded them from the stands “It’s happening RIGHT NOW guys!” and they quickly recovered.

The game had an entirely different energy than the night before. They won 11-4. But they took home a lot more than the win.

Life is like baseball. It keeps moving no matter what just happened. You can live in the past and beat yourself up for the things that didn’t go as expected, or you can stay focused, live in the RIGHT NOW, ask yourself WHAT’S NEXT?, and savor the sweet victories it has to offer.

How are you going to play your game?

Posted in be PRESENT, better THOUGHTS, FEAR and WORRY, have FUN, INSPIRING, KIDS get it!, PARENT wise and tagged Focus, Right Now, What's Next?