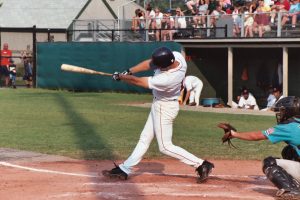 My son Blake played little league this spring; his first year in the minors which is kid-pitch instead of machine-pitch or coach-pitch. Things can get a little wild at times with 8 to 11-year olds winging the ball at the plate with the ambition of a big-leaguer but the accuracy of a blindfolded Isaac Newton. His at-bat season started strong with several 2-baggers and a home run. But as the games clicked on, his hitting clicked off. He agonized every time it was his turn to bat. Positive encouragement didn’t help. Extra batting practice and private coaching didn’t help. Neither did the new $100 bat.

I finally asked him what he thought the problem was. He looked at me with that endearing 10-year-old “duh, Mom…how could you not get this?” face.  “I’m afraid of the stupid ball, Mom. I don’t want to get hit!”

So there I was; needing to explain to him that sometimes worrying we are going to feel pain is worse than the actual pain itself. I mustered all my coaching tools, put on my best empathetic-mom face, looked him deep in the eye and delivered, “Blake, this is baseball. If you want to win the game, you have to step in close to the plate and swing. Be assured, at some point you WILL get hit with the ball. It’ll probably hurt for a few minutes. You might even cry. But once you get hit you’ll know what it feels like and you will live to tell about it. The next time you come to the plate, you’ll remember that you survived your last at-bat, and you’ll feel relieved and brave at the same time. Now, you decide if you’re ready to take the risk and step closer to the plate, maybe hit the ball out of the park and be a hero, or if you’d rather keep playing the what-if game in your head and never know how good it feels to break through the fear.”

Something must have clicked. At the next game he walked confidently into the box, glared at the pitcher, and swung hard one…two…three times. Crap. He looked at me and shrugged. Fortunately, he stepped into the box the next time with the same bravado and hit a whopping double that won the game. “I just quit worrying about getting hurt and played with everything I had.  It felt good!” He was ecstatic.  Score one for coach mom.

A couple of days later I met with a client who was paralyzed with fear that if he made the wrong decision about a possible life-changing situation he would suffer unbearable pain. Conversely, he could absolutely taste the freedom he so badly yearned for. He just couldn’t get past the fear that he might feel worse before he felt better. He was in agony.

Out of the blue, I was repeating my words. “John, life is like the game of baseball. If you want to win the game, you have to step up to the plate and swing. You ARE going to get hurt at some point, but you will survive….”

What game are you playing? I urge to you take the bat, step up to the plate and swing at whatever life has to throw at you. What do you have to lose? You might get hurt, but there’s no other way to improve your average.