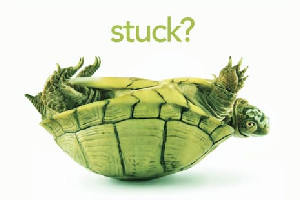 Cindy and I met for the first time at one of my satellite offices that smells intensely of espresso and sounds like the melding of a steam train and a jet engine with a splash of Bonnie Raitt hovering high in the corners. I started our meeting as professionally as I do with every client: “So…what’s crappy?”

I’m stuck. It’s as familiar a term to a life coach as “venti, half-caff, extra hot, soy, no- whip, sugar-free, cinnamon dolce latte” is to a Starbucks’ barista (or in this case, my would-be receptionist). Eight fewer words, but much more complex.

I’m stuck is the socially acceptable, out-loud way of saying, “I don’t know what to do next”, or “I cannot make a move” or the dreaded “I have no choice.”

Undressed from its social garb, however, I’m stuck really means “I’m afraid to make a decision between the options I have because I dislike the consequences that I perceive await me,” or its shorter-skirt version, “I don’t like my choices.”

Cindy felt stuck tighter than a hippo in skinny jeans. She was a single parent of two girls with little ex-spousal support, trapped in a job she loathed, and she longed to go back to school to start a different career. She could see no way out of her current situation and no way to start anew. Cindy lived in the perception of her current reality: no money, no time, no help, and no way out.

It was time to put on my “Stuck Whisperer” hat and help her achieve some wiggle room that would at least get her moving again. If you’re feeling stuck, I invite you to give this a try.

1.  List your choices. People who are stuck often believe they have no choices. Funny thing is, being stuck IS a choice. Not making a move IS a choice – no matter the cause of your stuckness (see #2). You may not be thrilled with your choices, but by listing as many as you can think of, the good, the bad and the ridiculous, you will at least be able to acknowledge there ARE things you could do if you chose to. Cindy knew she could quit her job, get a loan for school, work nights as a go-go dancer, sell her hair or a plethora of other options. She didn’t want to do them, but she acknowledged that they were all possibilities. She started her list and came up with feasible, doable ideas she could explore like get a roommate who would also babysit, apply for a scholarship, or actively look for a better job. Wiggle.

2.  Find the belief, excuse or fear that is keeping you stuck and question it.  My whispering experience says that it’s not the “taking action” part that’s got you feeling stuck; it’s the fear of the consequences of taking the action. What dramatic story are you telling yourself or believing will happen? What or who are you afraid of? Are you sure it’s going to turn out badly? 100% sure? What if there’s a slight chance it wouldn’t? How would you act if you didn’t believe it was hopeless, didn’t care what people thought, or weren’t afraid to at least try? If you can just imagine it, then the possibility exists. Cindy confessed she was living in fear of the unknown and there was no way she could predict the future with 100% accuracy, Wiggle. Wiggle.

3.  Look for evidence that you are not alone.  Not in a misery-loves-company way, but in a who-or-how-many-others-have-made-it-through-this-type-of-situation? way. Whose rise from misfortune has inspired or amazed you? How did they do it? Not sure? Then ask them. Call them. Write them. Google them. ALL of them! Keep searching until you have enough evidence that your situation is unstuckable. Cindy already knew several single moms who had quit awful jobs, gone back to school, or had asked for help and received it. She readily admitted that evidence showed it could be done. Wiggle. Wiggle. Wiggle.

Unless you find yourself chest deep in quicksand, you’re probably not really stuck. You may not like your choices, but admitting you have choices, admitting you can’t be 100% certain what’s going to happen or that it’s going to be bad, and knowing others have successfully made it to the other side will create the wiggle room you need to move forward.

Give it a try. It worked for Cindy. It can work for you.